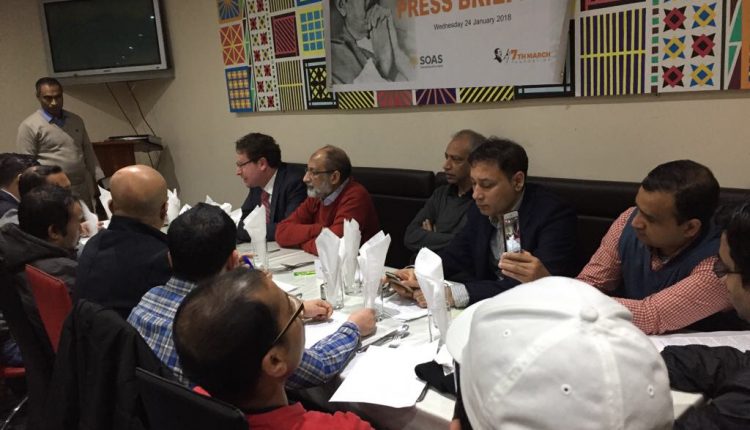 University of London are delighted to announce the inaugural Sheikh Mujibur Rahman Lecture 2018.

It is an unfortunate fact of history that life and work of Bangabandhu Sheikh Mujib Rahman are little known outside Bangladesh, particularly in the west. We believe that his ideas and legacies need to be debated and discussed in an open manner and that as a historical figure he deserves wider recognition.

The first lecture in what we hope will be a long series of annual lectures will explore how Sheikh Mujibur Rahman led the challenging struggle for a democratic alternative to military rule and for the independence of Bangladesh. In this, the challenges were perhaps greater than they were for most leaders of the other new nations of Asia and Africa.  The lecture will also examine the significance of his historic speech on 7 March, 1971. As well as his readiness to make great personal sacrifices: twelve out of twenty-four years of undivided Pakistan he spent in jail, facing the gallows twice.

“Young people today, born after his assassination during a military coup in 1975, need to hear his story”.  Professor James Manor

We are very honoured that the inaugural Sheikh Mujibur Rahman Lecture will be given by Professor James Manor.

Professor Manor has written or edited 13 books, including one (co-authored with Richard Crook) which is in substantial part result of extensive fieldwork in Bangladesh: Democracy and Decentralisation in South Asia and West Africa: Participation, Accountability and Performance (Cambridge University Press).  When Professor Manor was Director of the Institute of Commonwealth Studies in London in the 1990s, a pooled grant from the Ford Foundation, the Asia Foundation and the British government also enabled him to supervise a group of three Bangladeshi students through their doctoral research on politics in Bangladesh.

The inaugural lecture will take place on 7th March, which is timed to commemorate a momentous day in the history of Bengali-speaking people in Bangladesh and the diaspora.

The lecture will be followed by a reception.

Admission: Free but pre-registration is essential